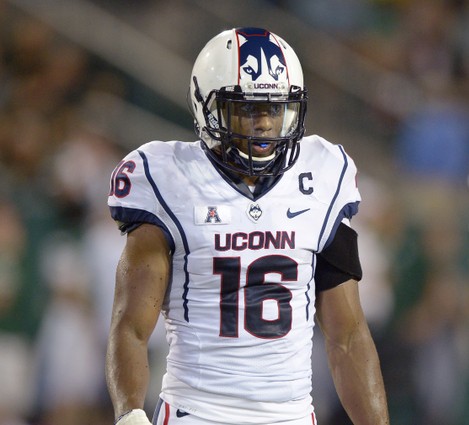 On paper, the Eagles improved tremendously at cornerback during free agency. The team signed top-target Byron Maxwell to a lucrative multi-year contract and also brought in Walter Thurmond III on a one year “prove it” deal. Along with Brandon Boykin, the additions of Maxwell and Thurmond III give the Eagles three above-average NFL cornerbacks. What the position does lack, however, is size. In Billy Davis’s defense, the cornerbacks are often asked to play a vital role in run support. A 6’1 and 207 pounds, Maxwell certainly fits the mold of the physical-style corner the Eagles are looking to build their defense around. Boykin and Thurmond III, however, are both listed under six feet tall and neither has much experience as a perimeter cornerback in the NFL. While some fans believe that Boykin will be given the opportunity to move into the role opposite of Maxwell, he is likely better suited at nickel back, where he has ranked as one of Pro Football Focus’s top coverage defenders in each of the last two seasons. It is also worth mentioning that rumors continue to swirl that Boykin could be traded prior to or during the NFL Draft to give the Eagles and extra day-two draft pick. If Boykin is moved (I believe there is a better than 50/50 chance that he will be), the Eagles will almost certainly draft a cornerback relatively early in the upcoming draft. While Boykin’s status with the Eagles might affect when the Eagles will draft a corner, I do not see it affecting the style of corner that Chip Kelly will look to add. The Eagles will almost certainly draft a corner who is at least six feet tall and near the 200 pound mark OR a player who makes up for a lack of height with excellent ball skills and impressive effort in run support. The Eagles will certainly strive to draft a cornerback who they feel has the ability to start on the opposite side of Byron Maxwell for the foreseeable future.

Let’s take a look at the cornerbacks in this draft and how their skill-sets could translate in the eyes of the Eagles. The notes and projections that go along with each prospect are a mixture of scout consensus and personal observations formed from watching games or film. Players are listed alphabetically. Total corners listed: 21

Alex Carter- 6’0 196 lbs.
Notes: Plus ability in press coverage. Physical tackler. Plus instincts and awareness after the snap. Struggles at times in man coverage. Below average in downfield coverage. Pac-12 connection is notable.
Projection: Fourth round

Jalen Collins- 6’1 203 lbs.
Notes: Plus speed for a corner with his size. Changes direction easily. Plus instincts and athleticism for a player with little starting experience. Relies on talent over technique at times. Not aggressive enough at times. Collins has met with the Eagles prior to the draft.
Projection: Early second round

Ronald Darby- 5’11 193 lbs.
Notes: Possesses plus speed that is needed for somewhat of an undersized corner. Above average body control and plays with high instincts and awareness. Above average in run support for a cornerback under six feet tall. Struggles against inside releases. Possessed questionable toughness. Bigger receivers will give him issues.
Projection: Second round

Ifo Ekpre-Olomu- 5’9 192 lbs.
Notes: Moves well. Plus tackler for small size. Plus ball skills. Played on the outside and in the slot while at Oregon. Relies on technique very little. Suffered severe knee injury at end of 2014 college football season. Has issues with big receivers. If Brandon Boykin is traded and the Eagles address other needs with their first two or three picks of the draft, Chip Kelly would almost certainly be interested in drafting Ekpre-Olomu in the middle rounds and moving Walter Thurmond III to the outside. Oregon and Pac-12 connection is notable.
Projection: Fourth round

Jacoby Glenn- 6’0 179 lbs.
Notes: Intense player. Elite hands and ball skills. Plus tackler for small frame. Improved in off coverage during the 2014 season. Limited athleticism for a player with his size. Opens his hips too early in press coverage. Below average speed to play man coverage downfield.
Projection: Sixth round

Doran Grant- 5’10 200 lbs.
Notes: Intelligent player. Elite tackler for size and position. Accelerates to the ball when in coverage. May be limited to playing as a nickel back in the NFL. Allows too much separation in crossing routes.
Projection: Fourth round

Kevin Johnson- 6’0 188 lbs.
Notes- Elite in man coverage. Plus press coverage skills. Strong for thin frame. Above average in run support. Can be fooled by head fakes. Missed tackles can be an issue. Johnson has worked out for and has met with the Eagles prior to the draft.
Projection: First round

Byron Jones- 6’1 196 lbs.
Notes: Though he is projected by most as an NFL cornerback, Jones has already been mentioned in my blog post about the safeties in the upcoming draft. Jones is my favorite prospect in the upcoming draft, and he has certainly caught the eye of Chip Kelly. He has elite skills in every facet of press-man coverage. Whether the Eagles view him as a safety or a cornerback, there is certainly a chance that Jones will be the best available defensive player at pick 20. Jones has met with the Eagles prior to the draft.
Projection: Late first round

Steven Nelson- 5’10 197 lbs.
Notes: I am bullish on Nelson. Elite physicality and competitiveness for a cornerback, especially when considering his size. Plus ability in press coverage. Plus ability as a tackler for his position. Below average speed for the position. Struggles at times in man coverage. Pac-12 connection is notable.
Projection: Late third round

Marcus Peters- 6’0 197 lbs.
Notes: Character concerns may make him a risky draft pick. Elite ability as a press corner. Great in space. Plays confidently. Technique is inconsistent. Thought to be relatively uncoachable. Loose footwork at times. Pac-12 connection is notable. Bleacher Report draft analyst Matt Miller believes Peters has a higher ceiling than any other cornerback in the upcoming draft.
Projection: Second round

Darryl Roberts- 6’0 182 lbs.
Notes: Plus recovering ability after being beaten. Long arms that he uses well in press coverage. Good technique as a tackler in run support. Penalized too often. Awareness needs improvement. Roberts has met with the Eagles prior to the draft.
Projection: Seventh round

Quinten Rollins- 5’11 195 lbs.
Notes: Plays stronger than his measureables would suggest. Competitive. Plus ability in press coverage. Physical for his size and has plus ability as a tackler. Recovers well when beaten. Technique could improve. Susceptible to double moves. Love of football has been questioned. While he was projected as a safety, NFL Network draft-analyst Daniel Jeremiah recently mocked Rollins to be drafted by the Eagles in the second round of the upcoming draft.
Projection: Third round

Eric Rowe- 6’1 205 lbs.
Notes: Like Jones, Rowe has already been mentioned with the safeties in the upcoming draft. I think Rowe could very well be a target for the Eagles in the second round, even if they have to trade up to get him. Pac-12 connection is notable. Rowe has worked out for and has met with the Eagles prior to the draft.
Projection: Second round

Josh Shaw- 6’0 201 lbs.
Notes: While he is projected by most teams as an NFL safety (and was mentioned in my blog post on the safeties in the draft), Jones is worth mentioning with the cornerbacks due to his experience playing the position while at USC. Attacks ball. Technique needs improvement. Gets caught sleeping too often. Pac-12 connection is notable. Respected NFL Network Draft analyst Daniel Jeremiah thinks Shaw is a bonafide starting NFL safety. Like Byron Jones, Quentin Rollins and Eric Rowe, Shaw’s size and experience at cornerback could make him an intriguing option for the Eagles at the cornerback or safety position.
Projection: Fourth round

D’Joun Smith- 5’10 187 lbs.
Notes: Plus athleticism for the position. Accelerates to top speed quickly. Plus ability to locate the ball downfield. Above average tackler for size. Struggles to limit separation. Lack of competition while he was at Florida Atlantic is a concern. Susceptible to double moves.
Projection: Third round

Cam Thomas- 6’1 190 lbs.
Notes: Plus size for his position. Plus in-play awareness. Very good against screens and the run game. Adequate ball skills. Plays too high for his position. Below average speed downfield. Poor recovery speed when beaten. Thomas has worked out for the Eagles prior to the draft.
Projection: Seventh round

Trae Waynes- 6’0 186 lbs.
Notes: The best cornerback in the 2015 draft. Elite speed. Plus length for average frame. Elite man coverage ability. Allowed two touchdowns in the past two seasons combined. Elite pressing ability. Above average at defending the deep ball. Tends to use hands too much in coverage. Penalized nine times over the last two seasons. Anticipation is below average. Unrealistic option for the Eagles at pick 20.
Projection: Middle first round

P.J. Williams- 6’0 194 lbs.
Notes: Off the field concerns could make him a risky draft pick. Plus ability as a press corner. Plus strength for position. Plus tackler. Too physical at times. Does not possess a high-motor at all times.
Projection: Third round

Putting it all together: As I mentioned in an earlier blog post about the wide receivers in the draft, unless the Eagles trade up to draft Oregon quarterback Marcus Mariota, Chip Kelly may very well trade down in the first round and trade up in the second round. If this scenario does indeed play out and the Eagles target a cornerback with one of their first two picks, I expect targets to include (in order): Byron Jones, Kevin Johnson, Jalen Collins, Eric Rowe and Marcus Peters. If the Eagles trade up to draft Mariota or opt to fill other needs early in the draft, I expect Chip Kelly’s mid-to-late round targets to include (in order): Ifo Ekpre-Olomu (especially if Brandon Boykin is traded), Steven Nelson, Quinten Rollins, Josh Shaw, Darryl Roberts and Cam Thomas.

On deck: Which offensive linemen in the upcoming draft fit in the Eagles’ offense?