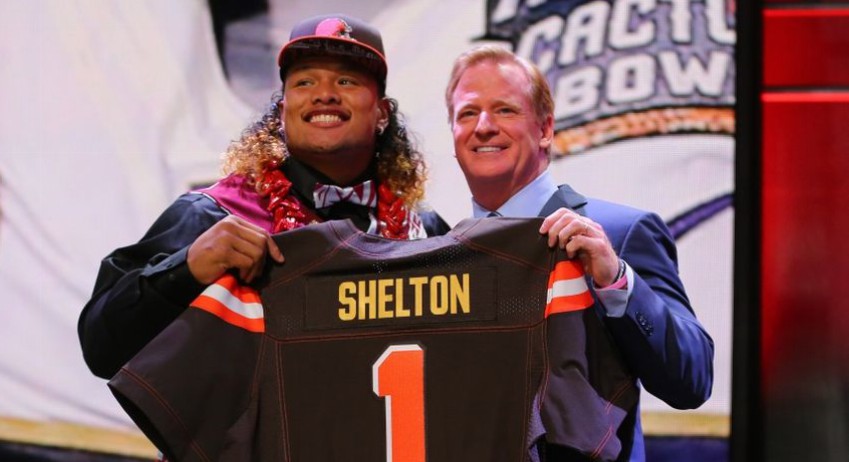 Here is my evaluation of all 32 picks made Thursday night:

1. Tampa Bay: QB Jameis Winston
No surprises, no drama. The Buccaneers held steady with the number one overall pick and got their quarterback. Grade: A

2. Tennessee: QB Marcus Mariota
This grade is more of a reflection on Ken Whisenhunt than anyone else. Tennessee had the opportunity to accept a blockbuster deal from the Eagles that would have resulted in multiple picks and players for the Titans. Instead, they kept the number two pick. And while I absolutely believe Marcus Mariota can be a great NFL quarterback, I have zero faith that Whisenhunt will shape the Titans’ offense around his strengths. Grade: C

3. Jacksonville: OLB Dante Fowler Jr.
No defensive player in the draft fits the Jaguars’ defense better than Fowler, and they made no hesitation in scooping him up with their first round pick. Grade: A

4. Oakland: WR Amari Cooper
Instead of going defense with their first round pick, the Raiders gave quarterback Derek Carr the star receiving threat he desperately needed. Grade: A

5. Washington: OL Brandon Scherff
Kind of a head-scratching pick here by the Redskins. They have a hole at right tackle, but Scherff, who is an outstanding lineman, is projected by most as an NFL guard. They also passed up on the draft’s best overall player in Leonard Williams, which could eventually come back to bite them. Grade: C

6. New York Jets: DT Leonard Williams
You win in the trenches, and the Jets solidified an already above-average unit by adding a monster of a defensive tackle. The Jets’ defense is going to be so nasty this season. Grade: A

7. Chicago: WR Kevin White
I imagine several people probably don’t like that the Bears passed up on Vic Beasley with the seventh pick, but consider me a fan of giving Jay Cutler another stud receiver to pair with Alshon Jeffery. Grade: B

8. Atlanta: OLB Vic Beasley
Dan Quinn desperately needed a pass rusher, and Beasley fell right into his lap at pick 8. The Falcons attempted to trade up to take the Clemson star, so keeping the pick and still getting their guy is a maximization of value. Grade: A

9. New York Giants: OL Ereck Flowers
The Giants wanted Brandon Scherff, and I had them taking Andrus Peat if Scherff was off the board before pick 9. Still, the Giants needed help on the offensive line and their pick reflected it. Grade: B

10. St. Louis: RB Todd Gurley
The Rams shocked the world on Thursday night by using a top 10 pick on a running back, but Gurley has the potential to be the best running back in the NFL. Grade: A

11. Minnesota: CB Trae Waynes
Mike Zimmer loves big, physical cornerbacks, and the Vikings were seemingly on Waynes for nearly a month. They added the draft’s top-rated cornerback with the 11th pick. Grade: A

12. Cleveland: DT Danny Shelton
Danny Shelton is a monster of a defensive lineman, and I applaud the Browns for looking to improve in the trenches. Grade: A

13. New Orleans: OL Andrus Peat
The Saints acquired center Max Unger during the offseason, then used their first of two first round picks on an offensive lineman. Obviously wanting to protect Drew Brees better, Peat should be an immediate starter for New Orleans. Grade: B

14. Miami: WR DeVante Parker
I had the Vikings moving up to pick 10 to draft Parker, so adding him at 14 is great value. Parker will team up with Jarvis Landry to make an immediate impact on a team that just lost Mike Wallace. Grade: A

15. San Diego (via San Francisco): RB Melvin Gordon
I gave Gordon a third round grade (which I know is lower than most people’s evaluations), so the Chargers trading up two picks to select him while giving up pick 17, a 4th round pick, and a 2016 5th round pick is not exactly going to earn them an outstanding grade. Grade: C

16. Houston: CB Kevin Johnson
I’m a little surprised that Houston didn’t snatch up Bud Dupree when he was available at pick 16, but Johnson has the potential to be an elite NFL cornerback and the Texans are reportedly interested in trading Jonathan Joseph. Grade: B

18. Kansas City: CB Marcus Peters
Peters is a perfect fit under the direction of Andy Reid, especially since the Chiefs had a need at the cornerback position. He’s had some character issues, but he undoubtedly can be a top-5 NFL corner if he can keep his act together. Grade: A

19. Cleveland: OL Cameron Erving
I expected the Browns to go wide receiver here, and the decision to add a player projected by most as an NFL center is a bit perplexing. Grade: C

20. Philadelphia: WR Nelson Agholor
The second that Marcus Mariota was drafted by the Titans, the grade of the Eagles’ first round pick had a limited ceiling. Agholor is a tremendous fit in Chip Kelly’s offense, though, and should make an immediate impact alongside Jordan Matthews and Josh Huff. Grade: B

21. Cincinnati: OL Cedric Ogbuehi
Not the best value here, but if Ogbuehi can get healthy and remain healthy, he’ll be a great offensive linemen in the NFL for a long time. Grade: B

22. Pittsburgh: OLB Bud Dupree
There are questions about Dupree’s ability to develop as a pass rusher, but the Steelers drafting him at pick 22 is tremendous value. Grade: B

23. Denver (via Detroit): OLB Shane Ray
The Broncos traded pick 28, a 5th round pick this year, a 5th round pick next year, and starting offensive guard Manny Ramirez in order to move up and select a currently-injured player who was recently cited for marijuana possession. Consider me a skeptic. Grade: D

24. Arizona: OL D.J. Humphries
Arizona got an absolute steal when Humphries slid to pick 24. Offensive line may not be the Cardinals’ biggest need, but Humphries will be an impact player for a long time in the NFL. Grade: B

25. Carolina: OLB Shaq Thompson
I understand the fit and think Thompson will be a good NFL player, but I absolutely hate the value of the pick. The Panthers missed on an offensive lineman, and Thompson might have been available at pick 57 for the Panthers in the second round. At the very least, Carolina should have traded out of the pick and taken Thompson later in the first round or early in the second round. Grade: D

26. Baltimore: WR Breshad Perriman
Perriman is an excellent fit in the Ravens’ offense and even resembles Joe Flacco in the sense that he can be really, really good or horrifically bad at any given time. Grade: B

27. Dallas: CB Byron Jones
Maybe my favorite player in the draft, Jones is headed to Dallas to fill a hole in the Cowboys’ secondary. He should be a day-one starter. Grade: A

28. Detroit (via Denver): OL Laken Tomlinson
Detroit filled holes at both offensive guard positions in the first round by acquiring Manny Ramirez in a trade down and then drafting Laken Tomlinson. Protecting Matthew Stafford will obviously make the Lions’ offense much better. Grade: A

29. Indianapolis: WR Phillip Dorsett
Uh, what? The Colts have many other needs, including offensive line and both safety positions, and they use their first round pick on a 5’10 wide receiver? Andrew Luck may be sacked five times a game in 2015. Grade: F

30. Green Bay: S Damarious Randall
Thought Green Bay would trade out, but they kept their pick and reportedly like Randall as a nickel cornerback, where they have a huge need. Randall has tremendous cover skills and can start immediately. Grade: B

31. New Orleans: ILB Stephone Anthony
The Saints were reportedly really high on Anthony, but I’m not a fan of the value here, especially when the Saints have the 44th overall pick in the second round. Grade: C

32. New England: DT Malcom Brown
I had the Patriots trading into the early 20s to draft Brown, so remaining at 32 and still getting their guy is outstanding value. Grade: A